×
You are here: Home / Recipes / Bread / Bread Machine Pita Bread
Jump to Recipe
Pita bread is a popular bread from the Mediterranean cuisine. Pita bread is vegan and usually served with hummus for dipping or stuffed with fillings to make wraps. This is an easy recipe to make homemade pita bread dough in the bread machine and then bake them in the oven. 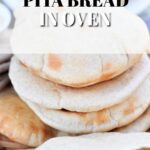 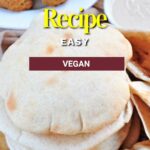 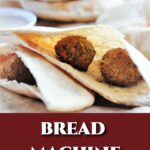 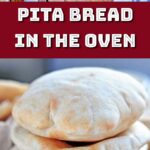 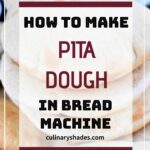 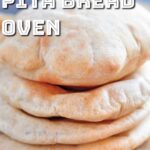 Pita bread is a popular bread from the Mediterranean cuisine made with few basic pantry ingredients. It is served for dipping, making wraps, or for lunch boxes. It makes a great appetizer for parties and potlucks when served with hummus.

It is really easy to make pita bread at home by making the dough in the bread machine using the dough cycle. Pita bread is then baked in the oven at 500 °F.

Pita bread is made with basic pantry ingredients - all-purpose flour, whole wheat flour, water, salt, oil, and yeast. Bread flour also works well instead of all pupose flour. I use King Arthur bread flour and all-purpose flour interchangeably and both give great results.

The dough for pita bread can be made in the bread machine or using a stand mixer and I prefer to use instant yeast also known as rapid rise yeast which can directly be added to the flour and there is no need to activate it.

A little bit of sugar is added to feed the instant yeast which allows the dough to rise in volume. I like to use olive oil while making the dough, but other oil works fine as well.

It may sound that pita bread and naan are very similar. However, the main difference is in the texture and the ingredients. Both naan and pita use flour, oil, water, yeast, and salt, as the main ingredients. Naan also has yogurt or milk which makes it very soft while pita has a dry texture.

Naan is popular in Indian cuisine and served with curries while pita bread comes from Mediterranean cuisine. It is either served for dipping or as a pocket for filling and making a variety of wraps.

Can you make pita bread in a bread maker?

The bread machine dough cycle will do all the jobs of mixing, kneading, and getting the dough through its first rise. Once the dough cycle is complete, transfer the dough onto a lightly floured surface.

Now divide the dough into 8 parts or more and roll each of the pieces to a flat bread of about 4 mm thickness and then bake in the oven. You can dust a little flour as needed while rolling so that it does not stick.

How to cook pita bread in the oven?

Pita bread is baked at a temperature of 500 °F in the oven. Once the pita bread is rolled to about 4 mm thickness, place them on a baking tray and bake them in the oven for about 5-6 minutes until they start getting golden brown spots.

You will observe that after 2-3 minutes, the pita bread will start puffing in the oven, which is a great sign of making perfect pita bread. Don't be disappointed if they don't puff up, they can still be used for dipping.

How to eat pita bread?

Pita bread is highly versatile and can be served in a variety of ways. They are best served warm. Pita bread is used for dipping in hummus or baba ghanoush and makes a perfect appetizer for parties and potlucks. They are also great for lunch boxes.

Pita bread puffs up while cooking and makes perfect pockets when divided into halves. These pita pockets are used to create a variety of wraps. Falafel wraps are very popular vegetarian wraps filled with falafel, hummus, tzatziki sauce, and veggies.

You can get creative to stuff your favorite fillings in the pita bread. My kids love vegetable and paneer filling. They work well for a pizza base to be topped with pizza sauce, toppings, and cheese.

How to store pita bread?

Like most homemade bread, it is best to store pita bread at room temperature. You can store them in an air-tight container, or bread box, or just keep them wrapped in a kitchen towel for 3-4 days.

They should not be refrigerated else they can become very dry and lose their texture. Pita bread can be reheated in the microwave for a few seconds, or in the oven at 325 °F for 1-2 minutes.

If needed, you can spray some water on the pitas to help regain their moisture in case they become too dry.

Can pita bread be frozen?

Pita bread can be frozen for up to 2 months in freezer-safe containers or ziplock bags. They can be made ahead of time for meal planning. Before freezing the pitas, allow them to cool down completely and then stack them on each other with parchment paper in between two pitas.

When you are ready to serve, simply take out as much pita bread as you need and reheat it in the microwave for about 30 seconds or until it is warm. Frozen pita bread can also be reheated in the oven at 325 °F for 2-3 minutes.

If you enjoyed this recipe, you may also like 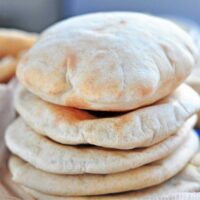 Prevent your screen from going dark

Hi! I am Alpa. I am passionate about cooking and love to share my tried and tested vegan and vegetarian recipes for your family and friends to enjoy!

Buy Me a Coffee