×
You are here: Home / Recipes / Bread / Bread Machine Cinnamon Rolls
Jump to Recipe
Cinnamon rolls are flavorful sweet rolls made with a filling of butter, cinnamon, and sugar in the dough. They make a perfect breakfast or a treat and can be eaten anytime during the day. This is an easy recipe to make no-egg bread machine cinnamon rolls at home that are light and fluffy. 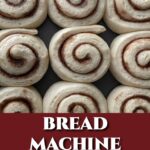 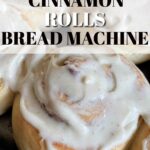 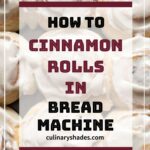 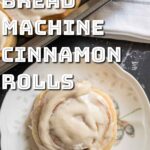 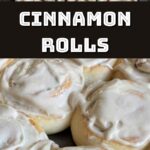 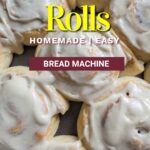 Cinnamon rolls are light and fluffy sweet rolls or pastries usually served for breakfast. But they are so delicious and irresistible that they are served as a treat or dessert and also eaten anytime during the day.

A bread machine is a great appliance to make a variety of dough and cinnamon rolls dough is no exception. Bread machines have a dough cycle that does all the tasks of mixing, kneading, rising, and getting the dough through its first rise.

A bread machine makes the task of making these rolls easier by making the perfect dough. Once baked a cream cheese frosting is applied while they are hot to give them a nice glaze.

This bread machine cinnamon roll recipe makes the best, eggless, delicious, and flavorful rolls. If you enjoy the Cinnabon rolls, you will love these homemade cinnamon rolls.

For the filling, you will need unsalted butter at room temperature, sugar, and cinnamon powder. Brown sugar works best, however, you can use organic cane sugar too.

Making eggless cinnamon rolls at home involves 3 steps - making dough, rolling and baking it after applying the filling, and topping it with icing.

Some machines require wet ingredients first and dry ingredients last, and some vice versa. For consistent results, it is best to weigh all the dry ingredients with a food scale. For more details check out this post on how to make dough in a bread machine.

Select and start the dough cycle. Allow the cycle to complete and this will make a well-proofed dough to make cinnamon rolls.

Once the dough cycle is complete, remove it from the bread machine pan and place it on a lightly dusted surface and knead it for a few seconds into a ball. Using a rolling pin, roll it evenly into a rectangle of about 4-5 mm thickness.

While rolling, you can dust the dough if it starts sticking to the surface. I have rolled the dough to a 12-inch by 18-inch size. If it is difficult to roll a large dough ball, you can cut it into two and then roll it into smaller, more manageable sizes.

Apply some melted butter on the rolled dough and then sprinkle a mixture of sugar and cinnamon powder generously to cover it well.

Now, starting from one of the longer edges, roll the dough toward the other edge as tightly as you can. After rolling stretch the loose edge to kind of stick onto the roll. This is to ensure the roll stays well-formed and does not loosen up.

Cut the roll into pieces of 1-inch size or as per your preference. I have used a serrated knife to cut the rolls but you can also use dental floss or a thread to cut it.

After cutting the cinnamon rolls, place them about an inch apart from each other in a baking dish or a casserole dish. Cover the baking tray with another tray, plastic wrap, or a kitchen towel in a warm place and allow it to go through the second rise.

The cinnamon rolls will usually take about 45 minutes to double in size. It depends on the ambient temperature and how long it will take to rise. An oven works well in such situations.

Warm the oven for about 5 minutes using the warm setting or about 170 °F and then place the covered cinnamon rolls tray for rising. The rolls will rise and double in volume in about 30-35 minutes.

Once the cinnamon rolls have been through the final rise, bake them uncovered in the preheated oven at 350 °F for 20 minutes. They will start turning brown and smell delicious!

Using a hand blender whisk attachment, or a stand mixer, whisk the cream cheese, softened butter, and icing sugar on low speed until it is light and fluffy.

Apply the icing generously on the cream cheese rolls while they are hot. This gives the rolls a nice shine and glaze.

The cinnamon rolls can be made using all-purpose flour or bread flour.

Instead of brown sugar, you can use regular cane sugar as well.

I have made the cinnamon rolls dough in the 2 lb. Hamilton Beach Artisan bread maker using the dough cycle. This recipe should work well in any bread machine as all of them have the dough cycle.

A big board is handy for rolling the dough with a rolling pin. A serrated knife is needed to cut the rolls. Once you allow them to go through the final rise, you will bake the cinnamon rolls in the convection oven.

You can also bake the cinnamon rolls in an air fryer if you are making a smaller batch.

Homemade cinnamon rolls can stay at room temperature for 3-4 days. If you want to keep them longer then they can be stored in the refrigerator for about a week. When you are ready to serve, just reheat them in the microwave for a few seconds.

If you enjoyed this recipe, you may also like 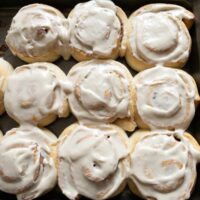 Cinnamon rolls are flavorful sweet rolls made with a filling of butter, cinnamon, and sugar in the dough. They make a perfect breakfast or a treat and can be eaten anytime during the day. This is an easy recipe to make no-egg bread machine cinnamon rolls at home that are light and fluffy.
4.91 from 11 votes
Rate Recipe Print Pin Save Saved!
Course: Breakfast, Dessert
Cuisine: American
Diet: Vegetarian
Prep Time: 20 mins
Cook Time: 20 mins
Kneading and Rising Time: 2 hrs 15 mins
Total Time: 2 hrs 55 mins
Servings: 15 rolls
Calories: 273kcal
Author: Alpa Jain
Follow on Facebook@culinaryshades

Prevent your screen from going dark

Hi! I am Alpa. I am passionate about cooking and love to share my tried and tested vegan and vegetarian recipes for your family and friends to enjoy!

Buy Me a Coffee